What CSV format would produce this?

I’m not sure if you can help with this.

I’m having problems figuring out how to work with the .csv files. Unfortunately, there’s only one example in the manual. I generally go through a lot of trial and error, with mutiple examples, in order to master a langague or a tool.

There is another diagram tool out there, that exports their maps into a .csv file, which can then be imported into Flying. They explain the FL CSV Import settings, and the CSV column interpretations.

Unfortunately, it’s implemented only on a Mac. So, if possible, I could use another example to learn from.

Is it possible for you to return the contents of a .csv file, which would reproduce this?

I think this example would be sufficient. I’m not looking for a general method or csv structure ; as you mentioned in another post, you have to write custom scripts & .csv in general.

I just need a csv that applies to the concept/argument diagrams that I tend to work with. Or specifically, just this one.

Here is a CSV file that, if imported into a document already containing the entity classes you want to use, will reconstruct the same document you provided:

Just as important are the settings you set in the first and second dialogs that appear. The first one asks you for general information about the file you’re importing. I set it for UTF-8, because that is what Macs (and most computers these days) use. Also notice that I am not using a header row, and I am importing into an existing document. 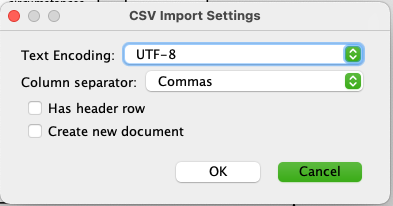 The importer then reads the file to see what columns are in it and presents the second dialog: 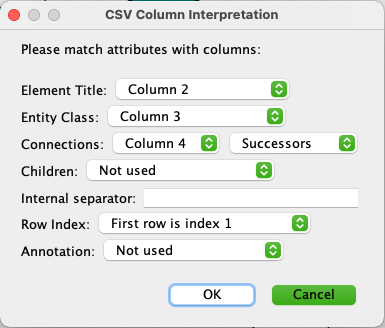 Make sure you set every menu to be the same as shown.

The result is, if imported into your original document, a parallel tree: 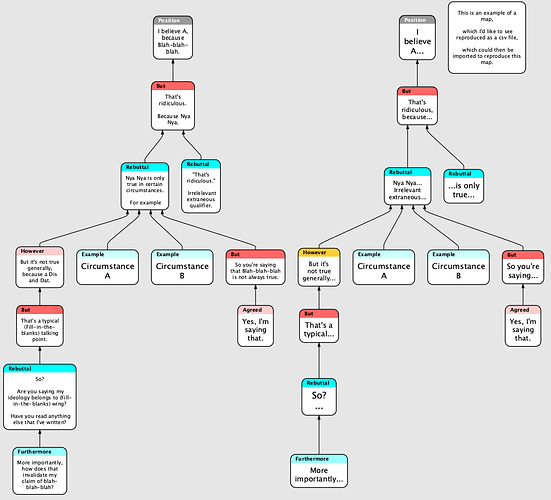 Notice that the “However” element is not the same color, because you have two different entity classes both called “However” and the importer just picked the first one it found whose name matched.